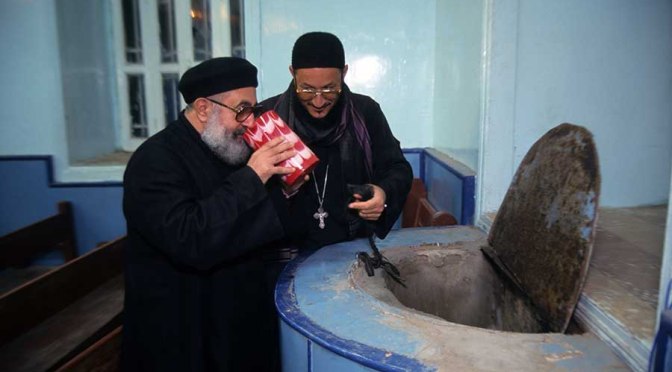 Dayr al-Garnus is approximately 10 km west of Ishnin al-Nasara. There we will visit the Church of the Holy Virgin and receive a blessing from the water of the Holy Family well. Tradition says the Holy Family quenched their thirst from it and thus blessed it.

Pamphlets from the local church suggest that al-Garnus is a phonetic corruption of the French word Argīnūs meaning “to check; inquire” because of the Nilometer wells designed to measure the water level of the Nile. However it is impossible to  find such a word in the French vocabulary. The closest correlation might be the Italian word Arginos, which has the same notion of checking and measuring.  Moreover, the historic names of the place — Pei-Isus (Coptic) or Bayt Isus/Dayr Bisus (Arabic) literally mean the  “House of Jesus.” 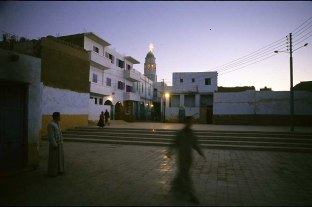 Photo: Norbert Schiller, the church of the Holy Virgin in Dayr al-Garnus.

Photo: Shangyun Shen, a painting of Flight into Egypt appears in the courtyard of the church.

Photo: Shangyun Shen, the back gate of Church complex in Dayr al-Garnus.

Photo: Shangyun Shen, a monk walking in the Chuch of Dayr al-Garnus

Photo: Paul Perry, a beautifully decorated 19th century liturgical book in the Church of the Holy Virgin of Dayr al-Garnus.