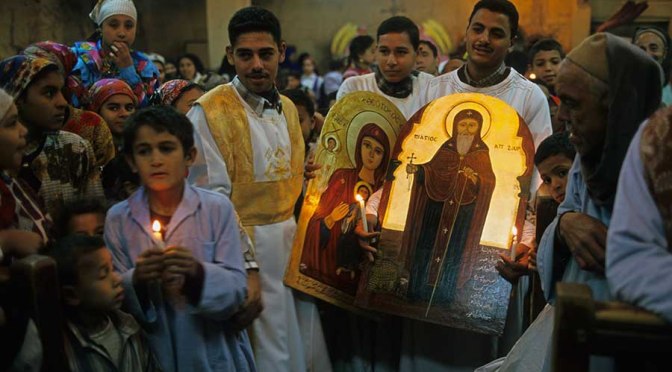 At the foot of the great Christian necropolis of Minya in Sawada on the East bank of the Nile is the church of St. Apa Hor, a third century martyr. Built within a Ptolemaic temple and like the one at Gabal al-Tayr, the Church of Apa Hor is cut into the rock. One enters the nave through a narrow tunnel, which has empty tombs on both sides. To the left inside the Church is a well, local monks use it as a water source.
END_OF_DOCUMENT_TOKEN_TO_BE_REPLACED

Crossing the Nile from Samalut, just as later Christian pilgrims have done for centuries, the Holy Family went to Gabal al-Tayr (Mountain of the Birds in Arabic) on the East bank of the Nile. The location is so named because of the migratory birds resting on its top. It is also called Gabal al-Kaff or Mountain of the Palm. Such nomenclature is attributed to the tradition that when the Holy Family came here, a pharaonic temple stood on the place where the church erects today. The idols of the temple collapsed in the presence of the true God, fulfilling the prophecy of Isaiah 19:1. Consequently, the pagan priests turned angry and intended to avenge. So the little Jesus put his hand on the mountain, thus left the imprint of his palm,  and split it in two to have a cleavage for the Holy Family to hide from the angry priests. Other tradtion says that Jesus protected the Holy Family from a stone falling upon them and consequently left his hand print.
END_OF_DOCUMENT_TOKEN_TO_BE_REPLACED

Bahnasa is 8 km. southeast of Dayr al-Garnus. Once the seat of a bishop, with monasteries and convents housing thousands of monks and nuns. It is said that there have been 366 churches in the area. For this reason, a plethora of ancient papyri were found here in the beginning of the 19th century, including a fragment generally accepted as the earliest extant record of a canonical New Testament text.
END_OF_DOCUMENT_TOKEN_TO_BE_REPLACED

Dayr al-Garnus is approximately 10 km west of Ishnin al-Nasara. There we will visit the Church of the Holy Virgin and receive a blessing from the water of the Holy Family well. Tradition says the Holy Family quenched their thirst from it and thus blessed it.
END_OF_DOCUMENT_TOKEN_TO_BE_REPLACED 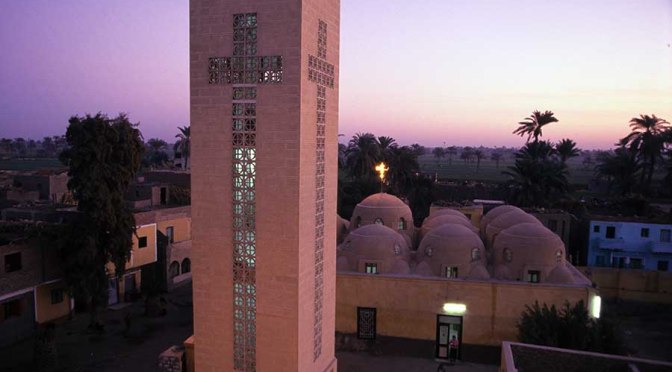 Continuing their flight, the Holy Family reached Ishnin al-Nasara, a village literally means the Garden of the Christians. It is believed that uppon reaching the village, the Christ Child felt thirsty. The Holy Family saw a well, but it was empty and Jesus cried. The Holy Virgin took his finger and held it over the well which then produced water immediately. After they had drunk enough, the water fell back to a low level.  Although The well is now covered for protection, pilgrims still gather every year on August 21 to witness the miracle that the well’s water rises at around 4:00 p.m.
END_OF_DOCUMENT_TOKEN_TO_BE_REPLACED